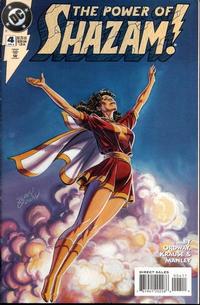 Genre
superhero
Characters
Captain Marvel [Billy Batson]; "Muscles" McGinnis; Muriel; Mary Marvel [Mary Bromfield]; Doctor Chiang; Sarah Primm; Tawky Tawny; Uncle Dudley; Curly
Synopsis
Billy learns that Mary is his lost sister, but when he goes to reveal the news to her, he is kidnapped. Tawky Tawny appears to Mary and tells her to say the word "Shazam!" which transforms her into Mary Marvel and she is able to free Billy from the kidnappers.
Reprints