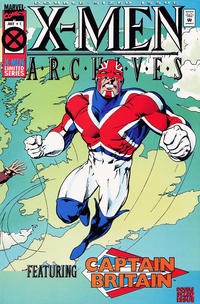 Stick With It, It Gets Better (Table of Contents: 1)

Introduction by Alan Davis and a retrospective on his early comic work.

Short publishing history of Captain Britain and a brief introduction to the events leading into the first story.

[The Return of Captain Britain] (Table of Contents: 3)

Genre
superhero
Characters
Captain Britain; Jackdaw; VILLAINS: Crazy Gang [Mad Jim Jaspers; The Jester; The Knave; Red Queen; Tweedledope; The Conjurers; Executioner; Dormouse]; CAMEOS: Merlyn; King Arthur
Synopsis
Captain Britain is returned home to England by Merlyn with a new costume which has the powers of his scepter integrated into it. He and his elf sidekick, Jackdaw, arrive right in the middle of a bank robbery being perpetrated by the Crazy Gang. After the gang is rousted and escapes, Cap learns that the world he has been sent to is an alternate version of earth and not the one he remembers.
Reprints

Throughout this series, Merlyn's name is alternately spelled the classic way as "Merlin" with no rhyme or reason for the difference in spelling. The earth that Cap is sent to in this story was officially dubbed Earth 238 in Marvel's pantheon of alternate realities in the story "Rough Justice" which appears in issue #4 of this series.

Genre
superhero
Characters
Captain Britain; Jackdaw
Synopsis
On an alternate version of earth, Captain Britain and Jackdaw are chased by police as superheroes have been outlawed and eradicated. They fall in with a group of homeless men who tell them some salient points about this new reality. Cap sends Jackdaw back to Merlyn to tell him they have been sent to the wrong world. A nearby rubbish heap produces a giant monster made of trash and Cap begins to battle it.
Reprints

The Junkheap That Walked like a Man! (Table of Contents: 5)

Genre
superhero
Characters
Captain Britain; CAMEO: Algernon
Synopsis
Captain Britain battles a giant trash creature with an impressive arsenal. After the monster is incapacitated, Cap leads it back to the junkyard where it was created to find the source of its power. He travels down a long pipe dripping a strange fluid and encounters a large talking rodent.
Reprints

In Support of Darwin (Table of Contents: 6)

Genre
superhero
Characters
Captain Britain; Jackdaw; GUESTS: Algernon; Opal Luna Saturnyne; Dimples; Avant Guard
Synopsis
Cap finds himself in conversation with an intelligent, and very polite, giant rodent. Jackdaw returns from his mission to Merlyn but claims he couldn't find the sorcerer. Alerted that Cap may be coming too close to interfering with her current plans, Saturnyne sends the Avant Guard to stop him. They blast him with a ray that devolves him into a monkey.
Reprints

Genre
superhero
Characters
Captain Britain; Jackdaw; GUESTS: Opal Luna Saturnyne; Dimples; Avant Guard; VILLAINS: Status Crew; Wilcox-Smith
Synopsis
Captain Britain has been devolved into a monkey and the Avant Guard leaves him behind as they take Jackdaw back to Saturnyne. She tells the elf that this reality is the most primitive of all of the alternate earths but she is about to use a mysterious liquid to give it a push in the right direction. Back in the junkyard pipe, Cap touches some of the liquid and returns to human form. As he is confronting Saturnyne, they are attacked by the Status Crew sent by the British home secretary.
Reprints

Saturnynes name is sometimes spelled "Saturnine" in this series.

Against the Realm (Table of Contents: 8)

Genre
superhero
Characters
Captain Britain; Jackdaw; GUESTS: Opal Luna Saturnyne; Dimples; Avant Guard; VILLAINS: Status Crew
Synopsis
Captain Britain and Saturnyne battle the Status Crew, England's chief security force. They scan Cap and learn that his power comes from his intense concentration and his greatest weakness is distraction. They blast him with a sonic beam to deprive him of his power. They then try to blast him with a bazooka but Jackdaw sacrifices himself to save Cap.
Reprints

Faces of Britain! (Table of Contents: 9)

Genre
superhero
Characters
Captain Britain; GUESTS: Opal Luna Saturnyne; Dimples; VILLAINS: Status Crew; CAMEOS: Merlyn; Jackdaw
Synopsis
Captain Britain and Saturnyne continue to battle the Status Crew and they are finally able to win the fight by dousing them with the liquid Luna plans on using to push the citizenry of England into a new sense of enlightenment. The Crew stops fighting when they realize how barbaric they have become and what a terrible version of England they live in. Cap takes a poor little street girl flying.
Reprints