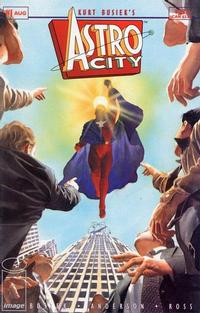 In Dreams (Table of Contents: 1)

First Line of Dialogue or Text
In my dreams I fly.
Genre
superhero
Characters
Samaritan [Asa Martin]; Rich; Karen; Shakira; Dr. Saturday; Honor Guard [MPH; The Black Rapier; Cleopatra; Quarrel [Jessica Darlene Taggart]; N-Forcer; Beautie]; The Menagerie Gang [Foxy Loxy]; Ms. Cavendish; The Living Nightmare
Synopsis
Though Samaritan devotes every moment of his waking day to using his great powers to aid humanity, it is only in dreams that he can enjoy them.
Reprints

The Biro Island in the story is most likely an homage to comics creator Charles Biro. Jack-in-the-Box's name appears in a newspaper's headline. The Irregulars appear on a page pinned on Asa Martin's office wall. Asa Martin is assigned an article on the First Family to proof-check. Gnomes, The Deacon, and Pyramid are discussed at an Honor Guard meeting.

Printed between pages 14 and 15 of the story sequence.

Reproduction of cover, printed sideways across the centerspread, with the text elements of the cover removed, except for the logo, which is reduced and moved to the bottom-right of the image.

Kurt Busiek discusses the genesis of his writing Astro City, and a preview of the next issue with a small reproduction of its cover.