Final issue of the series. Previous issue was published in late 1979.

No interior ad pages in this issue. Ads are limited to inside and back covers.

All 32 interior pages are comics or comics-related text material. Interior comics content (32 pages) is all reprint.
This issue has variants:
Keywords
final issue

[Voyage to Nowhere] (Table of Contents)

This cover is a redrawn, recolored, line-art version of the original cover for The Twilight Zone (Western, 1962 Series) #1 (November 1962), painted by George Wilson. Rod Serling is also represented by a pencil and inked drawing, rather than the usual photo inset. 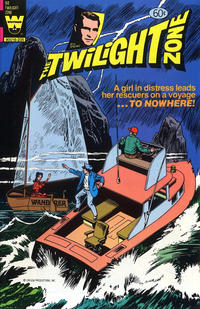 First Line of Dialogue or Text
Two skiers, Larry Clark and Ron Harrison, caught in a bad snowstorm, are about to take the only way out -- a quick slide through The Twilight Zone!
Feature Logo

In accordance with the “Early Gold Key style”, this 1962 reprinted story has borderless panels with pastel panel gutters of alternating (by page) green and orange.

Do Not Touch Exhibit (Table of Contents: 3)

Rod Serling does not appear in this story. In accordance with the “Early Gold Key style”, this 1962 reprinted story has rectangular dialogue balloons and borderless panels with pastel panel gutters of pink and blue.

There was no copyright attribution to Western Publishing for the original 1962 printing of this story, as there normally would be for specific stories that did not include the image and characterization of Rod Serling. However, for this 1982 reprint, a copyright attribution to Rod Serling's Cayuga Productions was added to this story. "© 1962 Cayuga Productions, Inc."

Wings of Death (Table of Contents: 4)

Voyage to Nowhere (Table of Contents: 5)

First Line of Dialogue or Text
For Dan Harmon and Roy Corbett, this is no ordinary fishing trip! -- They are about to make the catch of their career -- in The Twilight Zone!
Feature Logo

In accordance with the “Early Gold Key style”, this 1962 reprinted story has rectangular dialogue balloons and borderless panels with pastel panel gutters of alternating (by page) orange and green.