Getting His Goat! (Table of Contents) 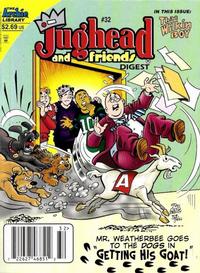 Getting His Goat! (Table of Contents: 1)

Appearance Is Everything (Table of Contents: 2)

The Severest Form of Flattery (Table of Contents: 3)

The Dragon Slayer (Table of Contents: 4)

I Feel Your Pain (Table of Contents: 5)

Credits from the reprint in Archie and Me Comics Digest (Archie, 2017 series) #16, no credits listed in this digest.

Now or Never (Table of Contents: 6)

Air Your Gripes (Table of Contents: 7)

Genre
humor; teen
Characters
Bingo Wilkin; Samantha Smythe; Sampson Smythe; Tough Teddy; Buddy Drumhead; Rebel
Synopsis
Mr. Smythe organizes a pro-environmental demonstration at City Hall, and inspired by his activism, the Bingoes show up at the protest to help the cause with their music.
Reprints

That Old Feeling (Table of Contents: 8)

Genre
humor; teen
Characters
Jughead Jones; Hot Dog; Moose Mason; Midge Klump
Synopsis
Jughead celebrates the coming of spring and the rebirth of nature. He also celebrates the fact that he's the only one who escapes the lovesickness that usually comes with spring fever.
Reprints
Keywords
spring fever

The poem Jughead recites in the splash panel ("Spring is sprung, the grass has riz, I wonder where the flowers is") is an anonymous poem sometimes known as the unofficial anthem of Brooklyn and other areas of New York.

Sounds of the Future (Table of Contents: 15)

Help from An Expert (Table of Contents: 17)

Genre
teen
Characters
Jughead Jones; Archie Andrews; Reggie Mantle; Forsythe Jones; Betty Cooper; Veronica Lodge; Miss Beazly; Waldo Weatherbee
Synopsis
Jughead is depressed about having to go back to school until he finds out what the menu is in the cafeteria.
Reprints