Grasp of the Killer Cult (Table of Contents)

This cover reprints only the main image from the cover of The Brave and the Bold #116. 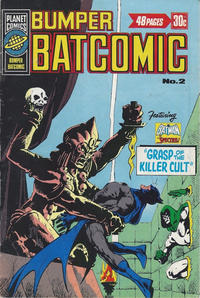 Grasp of the Killer Cult (Table of Contents: 1)

Job Number
B-2087
Genre
superhero
Characters
Batman [Bruce Wayne]; James Gordon; Spectre [Jim Corrigan]; Lola Lalanna; John T. Weaver; James Wilson
Synopsis
Bizarre murders are committed by seemingly upstanding citizens who are soon determined to be imposters. They turn out to be members of a World War II military construction crew possessed by the spirits of followers of the Far Eastern goddess Kali. It takes the power of the Spectre to prevent her resurrection.
Reprints

The Many Lives of the Spectre (Table of Contents: 2)

Job Number
B-2235
Genre
superhero
Characters
Batman [Bruce Wayne] (one vignette); Spectre [Jim Corrigan]
Synopsis
Batman fills in the readers on the background of his co-star this issue, the Spectre.
Reprints

Job Number
N-1352
Genre
superhero
Synopsis
Alfred decides to get a pair of handcuffs in order to practice putting them on felons, but when he practices on a fellow gentlemen's gentlemen, Alfred is shocked at the result.
Reprints

This printing begins with "Batman Presents the villain of the Issue--The Cluemaster" and is probably sourced from the reprint in Batman Family (DC, 1975 series) #2 (November-December 1975). This story is in two parts of 5.67 and 8 pages.