Dating is an estimate from www.ausreprints.com.

Captive of the Red Sun! (Table of Contents) 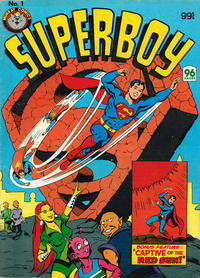 The Planet That Kidnapped Superboy (Table of Contents: 2)

Where, Oh Where Has Superboy Gone? (Table of Contents: 4)

Captive of the Red Sun (Table of Contents: 5)

Job Number
S-3653
Genre
superhero
Synopsis
In space, a 10 year old Superboy encounters a red sun for the first time since leaving Krypton, and is forced to land on a world populated by snail-creatures as his powers leave him. 10-year-old Superboy first visits a red sun world.
Reprints

The splash page and title of "Danger: Condition Red" has been removed to merge the original two stories into a single story.

To Fight the Unbeatable Foe (Table of Contents: 7)

There are two pages omitted from "Superboy's Do-It-Yourself Doom", including splash/title page in order to merge the original two stories into a single story.