The cover is based on the splash page to "The Origin of Superman!" from The Amazing World of Superman, Metropolis Edition (DC, 1973 series) #[nn] by Carmine Infantino (layouts), Curt Swan (finished pencils), and Murphy Anderson (inks). 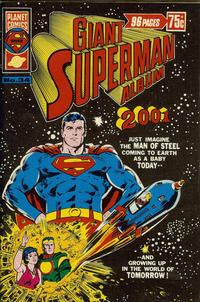