The Lady and the Lion! (Table of Contents) 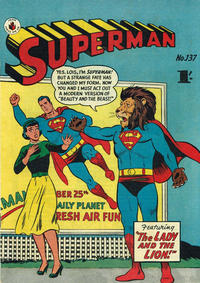 The Lady and the Lion (Table of Contents: 1)

Genre
superhero
Synopsis
Circe gives Superman a potion that causes him to have the head of a lion until he discovers the antidote.
Reprints

The Son of Superman (Table of Contents: 2)

The splash panel on page one of this story, a tier of art from the bottom of page five and a tier from the top of page six have been removed from this reprint, with other artwork recombined to reduce this story from eight to seven pages. The Fortress of Solitude key, which breaks the panel boundary on page three of the original, is still partly visible at the bottom of page two in the reprint.

Genre
superhero
Synopsis
When Clark and Lois are trapped on a remote island, Clark reveals his double identity to Lois and proposes marriage. But when he discovers that he can leave the island, Clark must convince Lois he faked the super-feats he performed on the island in order to get out of the engagement.
Reprints