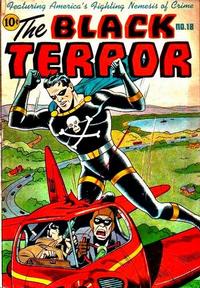 They're All Winners! (Table of Contents: 1)

Job Number
CC-676
First Line of Dialogue or Text
What is this strange and terrible malady...
Genre
superhero
Characters
The Black Terror [Bob Benton]; Tim [Tim Roland]; Jear Starr; Dr. Stephen Hardwick (a bacteriologist); Monahan (Policeman); "Brains" Smiler (villain, death); Smiler's mob (villains)
Synopsis
Bob, Tim and Jean are having a picnic when they hear a noice and investigate, finding a broken window in a shack laboratory and a man shot inside. The man, a Doctor Hardwick, has been studying a rare and mysterious disease for years, called Lata, which paralyzes a portion of the brain so that the victim imitates everything said or done by another. Now the reseach has been stolen!
Keywords
Lata

Job Number
CC-685
First Line of Dialogue or Text
When a vicious plot threatens disaster...
Genre
superhero
Characters
The Black Terror [Bob Benton]; Tim [Tim Roland]; Jean Starr (mention only); un-named old woman; woman's son; Armando (villain); other criminals (villains)
Synopsis
Bob and Tim are in the process of delivering a prescription to an address when they hear screams from the house. Inside is an old woman who says she is hearing voices, telling her to surrender a package mailed to the house from her supposedly dead son.

Bigger and Better (Table of Contents: 4)

Job Number
Ac-885
Genre
humor
Characters
A girl; her date
Synopsis
A man brings his girl a suprise box of chocolates, and as he gestures his intentions, she continues to eat and grow larger.....until he is shoved off the couch!

Genre
crime
Characters
Douglas Allen; Police Lieutenant Garry McMann; The Ghost [Dutch Galvin] (villain, a kidnapper)
Synopsis
Douglas worked at his father's company that helped make new types of games and created various types of puzzles, and he was working late one night on a puzzle idea of his own when a knock at the door allowed a kidnapper to enter. But his quick thinking allowed his Pliceman friend of his to eventually locate and save the lad.

Job Number
CC-650
First Line of Dialogue or Text
The frozen wastes of the far north...
Genre
superhero
Characters
The Black Terror [Bob Benton]; Tim [Tim Roland]; Killer Hearn (villain); Hearn's gang [Butch; others un-named] (villains)
Synopsis
On their way to General Hospital to deliver some medicine, Bob and Tim hear about the escape of Killer Hearn from prison, and come face-to-face with Kearn, who, with his gang, rob the institution of a million dollars in radium.
Keywords
Royal Mounted Police

Hour of Peril (Table of Contents: 8)

First Line of Dialogue or Text
Yes sir--wild animal beasts better not let mighty Oompah get 'em!
Genre
humor; jungle
Characters
Oompah; Mr. Socrates (an owl)
Synopsis
Oompah is tracking down wild and fierce jungle beasts, faining bravery, but has to secure the services of Socrates in order to find out why the beasts avoid him.

Genre
western-frontier
Characters
Tom Carson (trail boss); Danny Small; Jack Adams (a wrangler); Matt (the cook); cattle rustlers (villains)
Synopsis
Danny is hired on as a hand for the Diamond A as six waddies were driving some cattle, and he was said to bring the outfit luck. They needed it, because, up ahead in the mountainous country, were cattle rustlers were just waiting for them!
Keywords
The Diamond A

Job Number
CC-553
First Line of Dialogue or Text
When a big time gambler decides to...
Genre
crime
Characters
The Crime Crushers [Steve Barry; Ploopie Carr]; Astrophel (a horse); J. V. Williams (owner of Astrophel); Jane Williams) (William's daughter); George; band of gamblers (villains)
Synopsis
Ploopie is driving Steve nuts making animal imitations while his partner tries to read. When Steve remarks one imitation was right on the money, they discover the sound was made by a real horse....a race horse that some bettors are trying to put out of commission so that the nag they've bet on, Zombie wins instead.
Keywords
Laurel Downs Race Track

I Will Show You How to Learn Radio by Practicing in Spare Time (Table of Contents: 14)

Found on the inside back cover.

Illustrated advertisement from the J. E. Smith Company, encouraging readers to send in for six boxes of spare radio parts, along with a sample lesson and 64-page booklet "How to Be a Success in Radio", so that they could get training that would allow them to land a job in the radio field.

First Line of Dialogue or Text
The eagle on the quarter dollow says,..........

Illustrated advertisement for the line of books published by Popular Library, illustrating three books and listing other current titles, all available for 25 cents each.