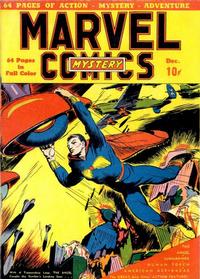 [Murder at the Racetrack] (Table of Contents: 2)

First Line of Dialogue or Text
I'm afraid of my own creation -- the Human Torch!
Genre
superhero
Characters
The Human Torch (origin retold in flashback); Professor Horton; un-named girlfriend of Blackie Ross (introduction); Johnson (introduction, prison con and former racecar driver); Blackie Ross (villain, introduction)
Synopsis
The Torch must battle a racketeer who wants his racing car to win so badly that he uses an airplane that fires incendiary bullets into the other cars.
Reprints

[The Treasure of Alano] (Table of Contents: 3)

First Line of Dialogue or Text
The mysterious enchantment of the China Sea is broken by the low moan of the fog-horn on the S.S. Oregon as she docks at Hongkong.
Genre
superhero
Characters
The Angel [Tom Halloway]; Jane Framan (introduction); Lelong [as Sumner] (villain, introduction)
Synopsis
The Angel saves a woman's life when a stranger attempts to steal her map that reveals the location of a treasure connected to the lost temple of Alano.
Reprints

First Line of Dialogue or Text
Namor dives from a stolen plane...
Genre
superhero
Characters
The Sub-Mariner [Prince Namor]; Pinkerton; un-named girl; Foley (policeman, death)
Synopsis
Namor heads for New York City, and while he is securing a disguise, a young woman accidentally sets her dress ablaze with a cigarette. Deciding that she can be of value to him in his war against the Americans, he kidnaps her from the hospital and takes her to his undersea kingdom.
Reprints

[The Town of Wanted Men] (Table of Contents: 5)

First Line of Dialogue or Text
Nestling in a valley protected by rocky mountains lay the headquarters of a town of wanted men --
Genre
western-frontier
Characters
The Masked Raider [Jim Gardley]; un-named Sheriff; "Hook" Tebbs (villain, introduction) and his men [Tex, Miguel] (villains)
Synopsis
The Raider disguises himself as a fugitive in order to infiltrate a gang that has been harassing and robbing ranches in several towns.
Reprints

[Origin of the American Ace] (Table of Contents: 6)

Lauretta is known to have lettered Superman stories at National.

Genre
superhero
Characters
The Angel [Tom Halloway]; the Nazis (villains, some die)
Synopsis
The Angel takes matters into his own hands against the Nazis, who, without warning, attack the Polish town of Grybow.
Reprints

[The Battle with Bardak] (Table of Contents: 8)

First Line of Dialogue or Text
After the death of his parents, David Rand goes to live with Zar, the lion, whose life he once saved.
Genre
jungle
Characters
Ka-Zar [David Rand]; Zar (a lion); Sha (lion mate of Zar); Trajah (an elephant); Zoro (a lion cub); Chaka (an ape); Kru (a vulture); Bardak (villain, introduction, an ape, death)
Synopsis
After the death of his parents, Ka-Zar goes to live in the cave of his friend, Zar, but soon faces Bardak, who has found a mirror in the abandoned tent of De Kraft and refuses to relinquish it. Ka-Zar takes it from him and Bardak swears revenge.
Reprints

First Line of Dialogue or Text
Which of you two was drivin' that crate?
Genre
humor
Reprints