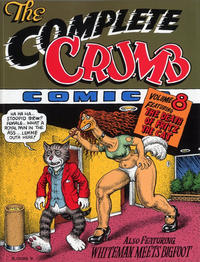 The Complete Crumb volume 8- The Death of Fritz the Cat (Table of Contents: 1)

Synopsis
The front cover flap includes an excerpt from the book introduction. A panel from "The Confessions of R. Crumb" story is included. Two blank pages; Title and publisher page; Indicia page with production and reprint credits; table of contents

The introduction is signed "Yoko Buncho, Sauve, France 1991." Preceded by a page of sixteen photos from the early to mid-70s.

The second edition of The Complete Crumb volume 8 (July 1997 printing) only lists Jay Lynch, Jay Kinney, Bruce Walthers and Crumb as the artists for this jam.

Perdido, Part One (Table of Contents: 10)

From Summer/Fall 1971. The catalog cover comprises of a series of tiny drawings arranged in a rectangle surrounding the ad type. Some of the figures depicted include The Marx Brothers, Mickey Mouse, Carmen Miranda, Frankenstein, a "The Shadow" comic book, a box of shredded wheat, Howdy Doody, a copy of Collier's magazine, Betty Grable, Bela Lugosi as Dracula, Al Jolson, Milton Berle, a Hoover vacuum, a dirigible, a Flash Gordon book and a Superman comic book.

First Line of Dialogue or Text
The fact of the matter is, I know they're trying to get me because I bring you the TRUTH!
Genre
humor; satire-parody
Characters
Robert Crumb
Synopsis
A satirical paranoid rant from Crumb, as he suspects fumes from his ink bottle is actually poison gas planted by a government agent.
Reprints
Keywords
adult

First Line of Dialogue or Text
He who shits on the road will meet flies on his return
Characters
Mr. Natural; Jesus
Reprints

First Line of Dialogue or Text
It's back to nature with...
Characters
The Snoid; Kilroy; Angel McFood; Maryjane
Reprints
Keywords
adult

Little Guys Fight it Out With Big Women! (Table of Contents: 21)

First Line of Dialogue or Text
I...I...guess I just don't...er...didn't have enough respect for women...
Reprints

And Now, A Word to You Feminist Women (Table of Contents: 26)

Mr. Natural Does the Dishes (Table of Contents: 28)

A Gurl in Hotpants (Table of Contents: 29)

Sittin' Around the Kitchen Table (Table of Contents: 30)

The Girlfriend (Table of Contents: 31)

First Line of Dialogue or Text
I am the greatest!
Genre
humor; satire-parody
Characters
Mr. Natural; Snoid
Synopsis
Members of the Cult of Mr. Natural get into a street fight with members of The Cult of the Snoid.
Reprints
Keywords
adult

On the Bum Again, part two (Table of Contents: 34)

Cover to the mini-comic published by Gary Arlington. Not to be confused with Zap Comix #7 (Print Mint, 1974). The price on the cover is seven cents. The drawing shows Crumb standing alongside two female Bigfeet.

The Confessions of R. Crumb (Table of Contents: 40)

Genre
humor; satire-parody
Characters
Robert Crumb; Gummo; Mommy #1; Mommy #2
Synopsis
Crumb sends up right wing patriotism and then is kicked out by a long lost Marx brother. He then changes into a fetus and is born again.
Reprints
Keywords
adult