Art revision from Leonard Frank to Tomsey ? by Craig Delich. 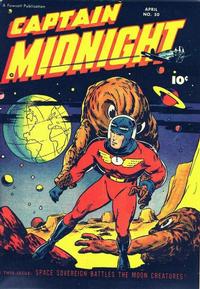 In the AC Comics' reprint, the strip is titled "Major Midnight".

Swear by It (Table of Contents: 3)

The Moon Creatures! (Table of Contents: 5)

Genre
adventure; aviation; science fiction
Characters
Captain Midnight [Captain Jim "Red" Albright]; Icky Mudd (cameo); Joyce Ryan; Professor Edan; the Moon creatures (villains, all die); Jordan (villain, death)
Synopsis
Arriving on the Moon, Captain Midnight and his companions bury escaped convict and murderer Jordan, who had planned to use the Moon as a hideout. Splitting up soon after, to scour the Moon for any sign of life, they find themselves threatened by living rocks with a silica base.
Reprints

In the AC reprint the strip is titled "Major Midnight."

Story is a continuation of a story in the previous issue.

In the Tempest (Table of Contents: 6)

Across the Border (Table of Contents: 9)

Genre
adventure; aviation
Characters
Captain Midnight [Captain "Red" Albright]; Ichabod Mudd; Paul Petrov; Mr. Gentry; Ivan Shark (villain); Gardo (villain)
Synopsis
When Captain Midnight is asked to make a movie on the life of the notorious Ivan Shark, he discovers that Shark is still alive and must use his mechanical bloodhound to track him down.
Reprints

In the AC reprint, the strip is called "Major Midnight" and the last 1/3 of the page of the story was an advertisement.