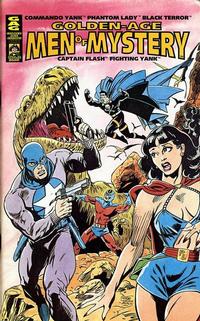 Men of Mystery (Table of Contents: 1)

Inside front cover. Text article containing information on each character featured in this issue of Men of Mystery, the dedication of this issue to Jeff Gelb, an illustration of Commando Yank from his story in Wow Comics (Fawcett, 1940 series) #61 (December 1947) and an illustration of Captain Flash (head only) from Captain Flash (Sterling, 1954 series) #3 (May 1955).

Riddle of the Arctic (Table of Contents: 2)

Genre
superhero
Characters
Chase Yale [Commando Yank]; Red Hawk; Pierre Grisette; Commando Yank
Synopsis
Chase Yale gets a letter from Red Hawk asking for help. When Chase arrives he finds that the fish have stopped running. Everyone in the village is going to lose their boats to Pierre Grisette, who loaned them money they can't repay, and Red Hawk's people will starve. Pierre has trapped the fish upstream with some whales that are feeding on them. He makes the whales sick by feeding them mustard and making them vomit up precious ambergris. Commando Yank stops him, releases the trapped fish, and Red Hawk keeps the ambergris so that he can sell it and keep his people from starving.
Reprints

The Crossroads of Crime! (Table of Contents: 3)

Genre
superhero
Characters
Fighting Yank [Bruce Carter III]; Larry Adams; Babs; Spike; Harmon; Bruce Carter (ghost?); Mrs. Jones
Synopsis
While driving the getaway car after a bank robbery Larry Adams hits Babs. He stops to help her and falls in love with her while she is in the hospital. While he is trying to figure out how they can have a future together his gang captures the Fighting Yank and this forces Larry to make his decision.
Reprints

The Nameless Men! (Table of Contents: 4)

The Return of Magico? (Table of Contents: 5)

Genre
fantasy-supernatural; western-frontier
Characters
The Ghost Rider; Magico; Specter
Synopsis
While Magico is in jail waiting for his trial a tornado hits the town. While the Ghost Rider and the guards are busy saving townspeople Magico manages to escape when the tornado hits the jail. He assumes that everyone will think he was killed so he uses one of his many disguises to set up another fake crime to lure the Ghost Rider into a trap.
Reprints

The story of the cover, continued in the next issue.

Genre
superhero
Characters
Phantom Lady [Sandra Knight]; Don Borden; Slim McKay; Sandra Knight; Tex Bronko
Synopsis
While out on a date Sandra Knight (Phantom Lady) and Don Borden come upon two men beating up the middleweight champ Slim McKay. He explains that they wanted him to throw his next fight and he refused. Phantom Lady decides that it is time to shut down this gang of thugs.
Reprints

Only the last two pages are in color.

Genre
superhero
Characters
Captain Flash [Professor Keith Spencer]; Dr. Magnum; Ricky; Professor Keith Spencer; Ewa; Di-Ku; Bana
Synopsis
When the quality of the uranium being supplied to the Atom City Laboratory begins to deteriorate Captain Flash and Ricky go to Africa to see what the problem is. While there Ricky is poisoned and Captain Flash has to go find the antidote. While searching for it he knocks down an ice cliff and unleashes three dinosaurs frozen inside.
Reprints

Inks credits originally given to Mike Sekowsky in error (per Tony Isabella, March 30, 2006).

Back cover. Promo for six upcoming AC comics, using a copy of the covers to promote them. The comics advertised are Golden-Age Men of Mystery #2, Cat-Man Ashcan #2, Golden-Age Greats #10, Femforce #97, Blue Bulleteer #1 and Rocketman Ashcan #2.