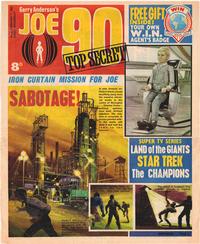 Animals In Space (Table of Contents: 1)

Text feature illustrating the development of space travel as portrayed by postage stamps from different countries. Third of an eighteen part series.

Captain Kirk's name is now correctly presented in the strip, having been called Captain KURT in the previous two chapters.

This third episode of the 'Land Of The Giants' comic strip is once again based on the pilot episode of the TV show, "The Crash". This is the final part of the adaptation. With the next issue the strip starts telling completely original stories based on the TV series.
The TV episode was written by Irwin Allen (story) and Anthony Wilson (script).