Feature character verified by Flessel and added by Craig Delich. 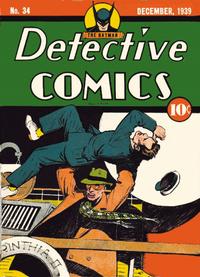 Genre
superhero
Characters
Batman [Bruce Wayne]; Charles Maire (Karel's brother); Karel Maire; Duc D'orterre (villain, master of the Apaches, introduction, death); some Apaches (villains)
Synopsis
After Bruce Wayne runs into a man with no face, as the Batman he learns of a sinister man responsible for it, who wants the man's money and his sister.
Reprints

This story directly follows the story line in issue #32.

First Line of Dialogue or Text
Aha! At last! My formula for a 'headache gas'...
Genre
humor
Characters
Whatt A. Knutt

[The Ambassador to Bolaria] (Table of Contents: 5)

The Last Trick (Table of Contents: 6)

The Spy Mystery (Table of Contents: 13)

The White Goddess (Table of Contents: 16)

Genre
detective-mystery
Characters
Slam Bradley; Shorty Morgan; James Kildare; Boris Borscht
Synopsis
Slam and Shorty take their reward money and go on a nice ocean vacation, until their ship is blown out of the water by an enemy submarine.