Inks credit by Craig Delich; previously given to Ray Burnley. 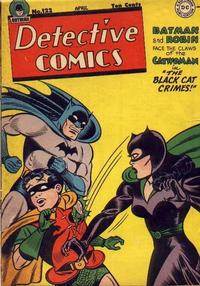 The Kitty Car, Catwoman's answer to the Batmobile, 1st appears in this story. Story later adapted as part of BATMAN VS. 3 VILLAINS OF DOOM, a 1966 prose novel.

The Crazy Customers! (Table of Contents: 6)

Pencils credit by Jerry Bails. Previously given to Howard Sherman.

Two of America's Most Famous Boys! (Table of Contents: 8) (Expand) /

The Uncandid Camera! (Table of Contents: 9)

The Talking Cat (Table of Contents: 10)

Four Swords for a King (Table of Contents: 11)

How to Outbluff a Vicious Dog at Night! (Table of Contents: 15) (Expand) /