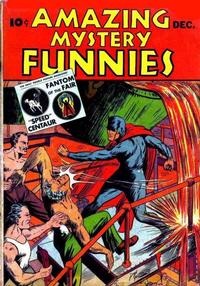 Meet the Artist Who Draws "Speed Centaur" (Table of Contents: 1)

The inside front cover has a half-page text feature on Malcolm Kildale, accompanied by a small (self?) portrait of the artist.

"As winter draws near, the World's Fair closes its gates until the spring... the Fantom turns elsewhere in his work of safeguarding human life and upholding justice", the story being set in a steel mill in Pennsylvania.

The true face of The Fantom is shown at the end of this story.

First Line of Dialogue or Text
I realize now, that it is Dorian, whom you really care for...
Genre
adventure
Characters
Barry Finn; Frogga; Dr. Allam West; Dorian West; Sulla (villain, Zaroff's assistant); Dacia Zaroff (villain, Zaroff's daughter); General Kyota (villain)
Synopsis
Having been spurned by Joan, Barry and Frogga leave on a luxury cruise to Hawaii to get their minds off the lady, unaware that Dorian is also going through bad emotions over Barry as well. Meanwhile, Dacia and General Kyota plan to ship a highly corrosive acid (mixed with oil) to where the U.S. Pacific Fleet is stationed, intent on destroying it.

Genre
adventure
Characters
Don Dixon; Dr. Lugoff (ruler of all the swampland below the water); Princess Wanda; Queen Tania; King Taal; Queen Dagmar (villain); Kul of Fens (villain, ruler of all the swampland above the water); The Marsh Men (villains)
Synopsis
An uneasy truce is in place after Queen Dagmar is ousted as leader of the Marsh Kingdom, but that doesn't stop her from aligning herself with Kul of Fens to get her retribution.
Reprints
Keywords
Fenians

This is a continuing story line.

There is also a small illustrated advertisement from Spencer Fireworks Company, offering readers free catalog and fireworks just for showing off the company's catalog to others.

A illustrated page of nine surprising and curious facts.

First Line of Dialogue or Text
At their usual meeting place...
Genre
superhero
Characters
Speed Centaur; Reel McCoy; Prince John of Avon; The Ten Knights of Doom (villains); Prince John's Uncle (villain, mention only)
Synopsis
After mopping up crime in the "City of Rackets," Speed decides to take a well deserved vacation. With Reel, he explores a cave beyond the one he uses as a base of operations and which carries them back in time. As they travel down a road, they are challenged to do battle with Ten Knights of Doom.
Keywords
Nob Nose Mountain

Script credit revised from Kildale to ? by Craig Delich.

First Line of Dialogue or Text
An atom?
Genre
humor
Characters
Adam [Smasher]; on-looker
Synopsis
A scientist invents a super atom bombarder which can harness the energy of 10,000,000,000,000,000 atoms per second and will cause the Earth to spin around 1400 times faster, causing one day to pass every minute. The ignoramus the scientist is explaining this to doesn't really understand the concept but wonders what effect the device will have on people.