Captain Marvel and the Clock of San Lajardo (Table of Contents) 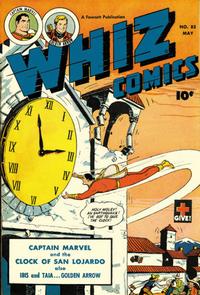 The Clock of San Lojardo (Table of Contents: 1)

How to Eat Spaghetti without Getting Wetty (Table of Contents: 2)

In Name Only (Table of Contents: 3)

Genre
western-frontier
Characters
Golden Arrow; White Wind (horse); Tex; Rick
Synopsis
A white man is killed by an arrow, and Tex leads a posse to punish the peaceful Indians. Golden Arrow finds out the arrow was not made by Indians and that somebody in Dry Gulch is behind the trouble.

The artwork, especially the unrealistic horses are exact matches, almost like traced copies of horses found in Krigstein's stories in #81 and #84.

A Sight for Sore Eyes (Table of Contents: 5)

The Golden Whale (Table of Contents: 7)

Originally credited to Gus Ricca, but there are none of his broad rounded chins and jaws, or squinting eyes. Compare Ibis in #86.