Index updated from information provided by Lou Mougin through the GCD Error list and a scan from http://goldenagecomics.co.uk/.

Wrath of the Avenger! (Table of Contents) 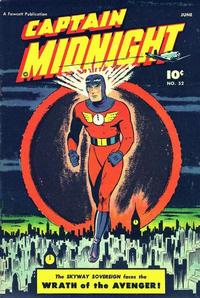 Wrath of the Avenger! (Table of Contents: 2)

A Dream of a Fellow (Table of Contents: 5)

Versus the Space Raider! (Table of Contents: 6)

Art credits by Craig Delich. A copy of this comic exists and on the indicia page is an autograph of Otto Binder followed by (SCRIPT) and the date 1-10-70 with a pointer to this story title.

The Case of the Tell-Tale Comb (Table of Contents: 7) (Expand) /

Your Invention Page! (Table of Contents: 8)

Genre
adventure; aviation; superhero
Characters
Captain Midnight [Captain Jim "Red" Albright]; Ichabod "Icky" Mudd [as Captain Twilight]; The Mad Maniac [Andre Landon] (book author)
Synopsis
Mudd decides to become an author of a book, and he creates a mythical hero called Sergeant Twilight, and ends up battling a villain called The Mad Maniac. He discovers, however, that the supposed villain is actually another book author involved in a publicity campaign for his own book!
Reprints

The last 1/3 page features the solution to the issue's crossword puzzle, and a two panel illustrated informational factoid titled "Denizens of the Deep": the Black Crappe and the Grayling.

When Lightning Strikes... (Table of Contents: 14)

Against Dr. Osmosis! (Table of Contents: 15)