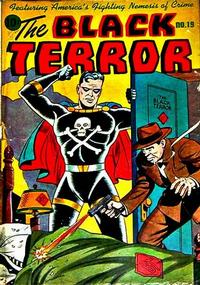 Crooks Who Would Be Kings; Steeplechase of Crime; Formula For a Getaway (Table of Contents: 2)

Illustrated frontispiece mastheaded the Black Terror, picturing the Terror Twins and three others not featured in the book, with the titles to the three Black Terror stories.

The Crooks Who Would Be Kings! (Table of Contents: 3)

Formula For a Get-Away (Table of Contents: 4)

Genre
western-frontier
Characters
Rusty Gilmore; Pop Gilmore (Rusty's father); Sheriff Mullens; Mr. Larkin (a banker); three bank robbers (villains)
Synopsis
After a hard morning's work in his father's blacksmith shop, Rusty takes a nap in the loft. When he hears an explosion down the street, he comes to find out that robbers have made off with $40,000 in cash.
Keywords
King's Crossing

Steeplechase of Crime! (Table of Contents: 6)

The Joke's on Youth (Table of Contents: 7)

Characters
Ralph Conroy (stamp collector); George Conroy (Ralph's father, death); Mrs. Conroy (Ralph's mother); Mr. Timmins (stamp dealer); Mr. Groves (villain, stamp dealer)
Synopsis
After the death of his philatelist father, young Ralph Conroy and his mother were having a hard time financially making ends meet, and decide to try and sell the duplicates to get them through. But a trustworthy dealer and friend helps to point out a fraud trying to be perpetrated by another dealer.

The second, larger illustration is signed, but cannot make out the exact name.

Job Number
CC-1092
Genre
humor; romance
Characters
Zippie; Lois (Zippie's girl)
Synopsis
When Zippie brings a bouquet of roses to his girl, she gives him a big kiss. Awestruck, he quickly leaves to get more roses!

Job Number
CC-599
First Line of Dialogue or Text
In the office of the We-Do-It Boys...
Genre
crime
Characters
The Crime Crushers [Steve Barry; Ploopie Carr]; Stephen Larrimore (millionaire); Gail Larrimore (Stephen's daughter); Chalmer's (villain); Bobo (villain, butler to Larrimore)
Synopsis
Steve notes an ad in the paper in regards to a $50,000 reward for the return of a millionaire's daughter who had been kidnapped when she was one year old. When the kidnapper's decide to use a look-alike girl with the same birthmark on her foot to collect the reward, the We-Do-It Boys get involved.