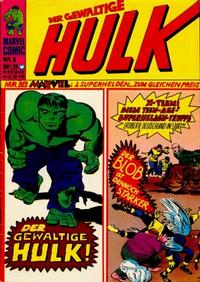 Job Number
X-763
Genre
Superhelden (superhero)
Characters
Hulk [Bruce Banner]; Thunderbolt Ross; Betty Ross; VILLAIN: Banner Bot
Synopsis
Bruce creates an indestructible robot which is able to withstand the power of a nuclear blast but the stress of completing it on schedule causes him to transform into the Hulk and he leaves this massive weapon of awesome power unattended. A foreign spy who has been hanging around jumps into the robot and takes off. The Hulk tries to stop the robot but can't and once he is worn out from the battle, he transforms back into Banner. Found lying in the desert by Ross and Betty, Bruce vows to build a bigger and better robot to take down the first one.
Reprints

Story continues from Der gewaltige Hulk #5 but with significant changes. In the original series ending, Bruce still used his gamma ray machine to transform himself into the Hulk and, although "meaner" than his alter ego, the Hulk still retained Bruce's intellect. Here all of a sudden, Bruce realizes that it is stress that causes him to become the jade giant and he does not turn back until he either calms down or wears himself out physically. Bruce and the Hulk now also have completely different personas and are only vaguely aware of what the other does. Creating a more inexplicable no-prize worthy mystery, without Rick Jones to hold them (there is your previous solution), what happens to Bruce Banner's glasses when he transforms to the Hulk and back again (in this story, they magically appear on the ground next to him in the desert after he makes the change).

Job Number
[V-914 ?]
Genre
Science-Fiction (science fiction)
Characters
Ezra Grumley
Synopsis
Humans are distressed to discover that the Venusians believe them to be hostile and have built robots to destroy any expedition that lands. A humble janitor thinks of building identical robots, reasoning that the Venusian's robots will not attack things like themselves, allowing peaceful contact to be made.
Reprints