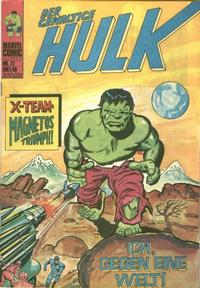 Genre
Superhelden (superhero)
Characters
Hulk [Bruce Banner]; General Thunderbolt Ross; Major Glenn Talbot; King Arrkam (villain); Executioner [Skurge] (Cameo)
Synopsis
The Hulk has been zapped into the future by the t-gun and fights with King Arrkam's forces before he is finally overcome. Once he regains consciousness, Arrkam asks his help in fighting "The Evil One" who turns out to be none other than the Executioner.
Reprints

Genre
Superhelden (superhero)
Characters
The X-Men [Professor X [Charles Xavier]; Cyclops [Scott Summers]; Angel [Warren Worthington III]; Beast [Hank McCoy]]; Marvel Girl [Jean Grey]; Iceman [Bobby Drake]]; The Stranger (first appearance); Brotherhood of Evil Mutants [Magneto; Mastermind; Toad; Quicksilver [Pietro Maximoff]; Scarlet Witch [Wanda Maxinmoff]]; Charlie (first appearance)
Synopsis
Xavier detects a powerful entity has arrived on earth and sends the X-Men to investigate. The Stranger tries to acclimate himself to Earth customs but runs across Magneto and the Brotherhood. The X-Men arrive on the scene and battle the Brotherhood, but the Stranger leaves with Magneto and Toad in the conflict. Quicksilver and the Scarlet Witch decide to return home to Central Europe. The X-Men encounter the Stranger again and Xavier realizes he is an alien. The Stranger explains that he has been collecting mutants from across the universe and takes Magneto and Toad away with him into space.
Reprints

Job Number
V-488
Genre
Science-Fiction (science fiction)
Characters
Gorilla-Man [Franz Radzik]
Synopsis
An inventor transfers his mind into a gorilla to commit crimes, but the gorilla controlling his body turns against him.
Reprints