Are You Ready for the Truth? (Table of Contents)

Logo design from Todd Klein via his Facebook posting Comics Logos C #38: CHALLENGERS OF THE UNKNOWN on 3 August 2021. 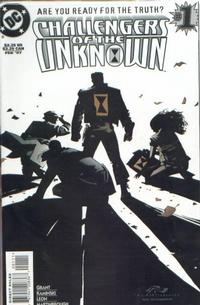 Challengers of the Unknown (Table of Contents: 1)

Genre
adventure
Characters
Challengers of the Unknown [Clay Brody; Marlon Corbet; Brenda Ruskin; Kenn Kawa]; Saxon; minister of Harvest church; Charlotte; Jamie; citizens
Synopsis
The Challengers are called to Harvest, Wyoming to investigate a string of mysterious disappearances dating back to the 19th century. The locals are hostile and the Challengers end up in a brawl. Saxon believes that the unknown should stay unknown. Finally, Brenda and Kenn are chained down on a playground for "the harvest": human sacrifices to some unnamed periodic power. Kenn picks the chain locks and shoves Marlon free as the "harvest" hits. A force whisks locals straight up into space. The chained Challs are ironically spared. The Challengers decide that the truth is stranger than fiction.

They refer to earlier unrecorded adventures.

This team pays homage to The X-Files TV show.

Of Planes, Trains, and Legacies (Table of Contents: 3)

Genre
adventure
Synopsis
This text article provides background and context for the events of the current series.

On the last two interior pages.