The Sacred Pearls of Comatash! (Table of Contents) 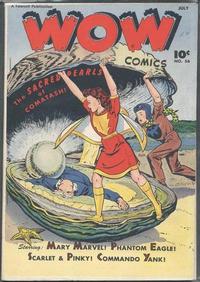 The Sacred Pearls of Comatosh! (Table of Contents: 2)

Easy Does It (Table of Contents: 5)

The Aerial Vikings (Table of Contents: 6)

Escape by Night (Table of Contents: 7)

The Fish Story (Table of Contents: 9)

The Banana King (Table of Contents: 10)

Genre
superhero
Characters
Commando Yank [Chase Yale]; Captain Luego (Policeman); Powder Mike King (villain, dope smuggler); King's gang (villains)
Synopsis
Making a goodwill tour of Latin America, Chase finishes a broadcast and notes bananas being loaded aboard a ship. He goes over and grabs one to eat, when thugs approach him, take the banana from him, knocks him out and throws him into the ocean to drown. Emerging as Commando Yank, he discovers each banana contains a metal tube full of dope, and the man behind the dope smuggling: Powder Mike King.
Reprints
Keywords
Santa Doma