She's a Hit! (Table of Contents) 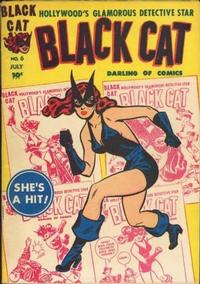 Script credit from Jerry Bails' Who's Who. Art id per Joe Simon.

First Line of Dialogue or Text
All-American athlete, Alan Bidell...........
Genre
adventure
Characters
Scarlet Arrow [Alan Bidell]; Roxanne (Alan's sweetheart); Roger; Senator Claxonhorn; fake Senator Claxonhorn (villain); Montmorcey (villain, fake Senator's bodyguard)
Synopsis
Roxanne's father is throwing a charity bash, and the money is supposed to be presented to a blowhard U.S. Senator. However, the Arrow must step in when it is discovered the Senator and his bodyguard are imposters.
Reprints

It's very probable the character in this story, Senator Claxonhorn, was swiped from radio's Senator Claghorn, played by Kenny Delmar on the Fred Allen show (later used by Warner Brothers in their cartoon series, "Foghorn Leghorn"). He uses all the same verbage the radio Senator did, including "Ah'm from the South -- the South that is!".

First Line of Dialogue or Text
The boys are all doin' it -- why not us, Scrubby!
Genre
humor
Reprints

Fear the Story of a Guitly Conscience (Table of Contents: 5)

According to the Jack Kirby Checklist Kirby only penciled the first page. Simon inked page one and completed the rest of the story.

The Midnight Killer (Table of Contents: 8)

Characters
The Red Demon [Straight] [aka Frank Full] (a judge, origin told); Habriel Geatter (radio announcer); Joe Monsi; Monsi's wife; Stefano Brothers (villains, mention only); Bull Brewster (villain, death); The Eel (villain)
Synopsis
The Red Demon sits on a throne in parts unknown, musing over the circumstances that turned Judge Straight into the crime buster, The Red Demon. A gangster, Boss Brewster, is killed at a masquerade party and one Joe Monsi is arrested for the crime and sentenced to die for it. However, a remark from Monsi's wife somehow rings true to the judge, who decides to go out among the criminal element to see how the other half lives. In doing so, he tracks down the Brewster Gang, and as The Red Demon, brings them to justice, and clears Monsi's name.
Reprints
Keywords
Globe (newspaper)

The Who's Who only identified Carlin as the scripter for the Black Cat in 1947, so name added with ? by Craig Delich.

Radio announcer in the this story was renamed for the true person, Gabriel Heater, famed broadcaster.

Much of the story is told in flashback.