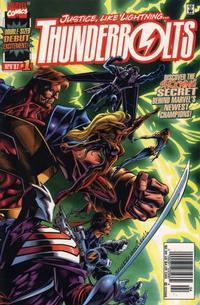 The Thunderbolts first appeared in The Incredible Hulk (Marvel, 1968 series) #449 (January 1997).
As revealed in this story, the Thunderbolts are the Masters of Evil: Baron Helmut Zemo disguised as Citizen V; Moonstone as Meteorite; Goliath as Atlas; Beetle as Mach-1; Fixer as Techno; Screaming Mimi as Songbird.