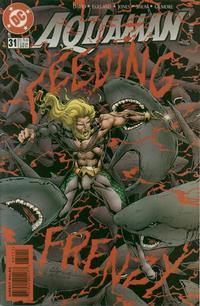 Genre
superhero
Characters
Cron One-Eye (shark); The Shark; Aquaman; Sea Devils; Dolphin; Cybernetic Entity; Grifid (shark)
Synopsis
Uses his powers aggressively has caused a physical change in Aquaman, and he goes back to Poseidonis to think about them. But the shark has taken over the city, and Aquaman must use his powers again to drive him off.

The Shark previously took over Atlantis in Adventure Comics #448.

Comments on Aquaman #26. Aquaman's ship, named the Ramona, is confirmed as a tribute to Ramona Fradon.