Next issue is Deadpool #-1.
This issue has variants:

Because No One Demanded It...The Return of...The Vamp! (Table of Contents) 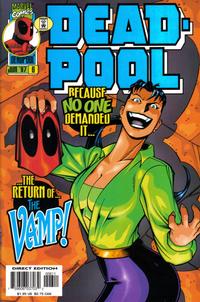 Everything You Need to Know (Table of Contents: 1)

Man, Check Out the Head on That Chick! (Table of Contents: 2)

Genre
humor; superhero
Characters
Deadpool; GUESTS: Typhoid Mary; Blind Al; Weasel; Patch; C. F.; VILLAIN: Vamp [Animus]
Synopsis
Deadpool takes a job which involves breaking a woman out of the loony bin. He takes another job to kill the same woman in the same loony bin. Sneaking in using Weasel as cover, Pool is forced to fight Vamp who is working at the asylum. Vamp turns into Animus which confuses Deadpool hormonally. Reaching the subject of his rescue/murder attempt, things become clear as the subject turns out to be Typhoid Mary whose distinct personalities have each put out a contract, one for her release and one for her death.
Reprints

Behind the Scenes (Table of Contents: 3)