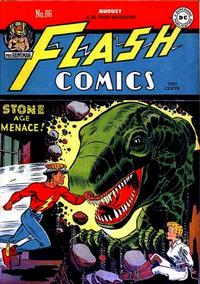 Job Number
AF 32 A
Genre
superhero
Characters
The Flash [Jay Garrick]
Synopsis
The sudden appearance of a prehistoric dinosaur in Keystone City lands Jay Garrick in prison when the Police fail to believe his story. So, the Flash must save him!
Reprints

First Line of Dialogue or Text
So, my new hat designs are too conventional!
Genre
humor

The Case of the Tell-Tale Comb (Table of Contents: 5) (Expand) /

The Black Canary (Table of Contents: 6)

Roy Thomas believes the inks to be that of Bernard Sachs. Inks credited to Frank Giacoia in Adventure Comics #416 reprint.

Funny Stuff; The Dodo and the Frog / promo (ad from the publisher) / 0.8 page (report information)

The Case of the Extra Ghost! (Table of Contents: 10)

First Line of Dialogue or Text
I know, Doctor, but just how strong should he be for his age?
Genre
humor

First Line of Dialogue or Text
Madame, the dress fits like a glove!
Genre
humor

First Line of Dialogue or Text
Out to Lunch
Genre
humor

The Valley of the Purple Pilgrim! (Table of Contents: 19)