With The X-Men Missing... Marrow Goes Wild! (Table of Contents) 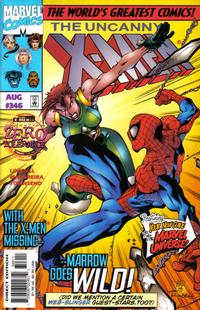 Profiles for the characters in this issue and synopsis

The Story of the Year! (Table of Contents: 2)

Genre
superhero
Characters
Spider-Man [Peter Parker]; J. Jonah Jameson; Robbie Robertson; Marrow; Callisto; Gambit; Bastion; Henry Peter Gyrich; Prime Sentinels; Hulk (cameo); Grovel (cameo)
Synopsis
Spidey takes a pic of Gyrich for the Bugle and decides to follow him as Jameson is hot for a story on Operation Zero Tolerance. The car is attacked by Marrow and Callisto who are angry about the same operation. Spidey tries to protect Gyrich from his foes until his two bodyguards turn into Prime Sentinels and start trying to kill everyone involved. It is Gyrich himself, angry at not being told about the Sentinels, who takes them down and allows Spidey and the two Morlocks to go free. Bastion tries to throw Jameson off of his trail by giving him dirt on the X-Men (but JJJ ain't buying it).
Reprints
Keywords
Operation Zero Tolerance

ERROR DEPARTMENT: Gambit, the only X-Man to appear in this issue, is only on one page where he is shown drinking from a lake. Reflected in the water on the last panel, we are shown Grovel, a character who will first officially appear next issue. This issue shows him to have a big zebra head which changes next issue to a very different fish like appearance.