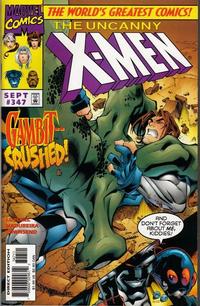 Profiles for the characters in this issue and synopsis

Genre
superhero
Characters
X-Men [Gambit; Beast; Joseph; Rogue]; Trish Tilby; Marrow; Callisto; Landscape; Spat; Grovel; Maggott; Nanny Robot (cameo); Angel (cameo flashback); Phalanx (cameo flashback)
Synopsis
The X-Men have just crashed through a stargate and are surprised to discover that they are back on Earth, but deep in the bowels of an underground cave. Once they gather themselves together (they were separated when they landed) they discover that Gambit has been captured by a pair of bounty hunters who know an awful lot about his past. They are also missing Deathbird and Bishop. Before they can figure out what is going on, however, they are confronted by Magneto's Nanny robot who is terribly happy to see Joseph.
Reprints