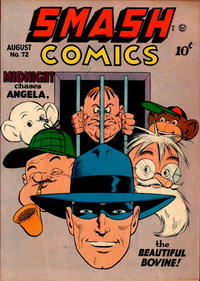 First Line of Dialogue or Text
All that fuss over an animated milk wagon!
Genre
adventure; superhero
Characters
Midnight [Dave Clark]; Doc Mortimer Wackey; Gabby (a monkey); Sniffer Snoop; Hot-Foot (a polar bear); Angela (villain, a cow); Percy Sharker (villain)
Synopsis
Midnight is searching for a stolen sapphire, but the criminal is searching for a stolen cow. Midnight's job is to protect that cow.

This adventure echos one of Cole's other creations: The Barker.

[The Apache Dancer] (Table of Contents: 2)

[The Dope Smugglers] (Table of Contents: 3)

Art identical to Zolne's credited Swing Sisson story in Feature Comics #111 and #119. Faces, way of standing with a bend in the hips and knees. Also the shuffling walking or running are special. The art has some resemblance to Alex Blum, but leg movement is quite different.

First Line of Dialogue or Text
The life of a cigar is brief and unimportant...
Genre
superhero
Characters
Lady Luck; Peecolo; Rat-Ears; Mr. Rample
Synopsis
A parcel of counterfeit money is picked up at the railway station.

This Is the Bird (Table of Contents: 6)

Genre
adventure
Characters
Jimmy Christian (reoorter); Senor Lopez (miner)
Synopsis
In the Andes the giant bird out of a legend comes down on the mountain winds and scares the guides and carries off.

[The Club Presidency] (Table of Contents: 7)

The art is identical to Zolnerowich's credited Swing Sisson stories in Feature Comics (Quality, 1939 series) #111 and #119.