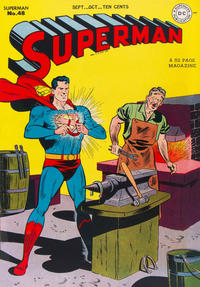 The Man Who Stole the Sun! (Table of Contents: 3)

Superman time travels under his own power for the first time.

First Line of Dialogue or Text
Help! Help! My tent is on fire!!
Genre
humor

Comeback of a Clown (Table of Contents: 9)

First Line of Dialogue or Text
Ulp! I just swallowed a quarter I had in my mouth!
Genre
humor

Lucky to Be a Yankee / advertisement / 0.5 page (report information)

The Rarest Secret in the World! (Table of Contents: 13)