On sale date from the publication date and volume number found at the Catalog of Copyright Entries, Part 2, Periodicals, New Series, Volume 35, January-December 1940, Numbers 1-4. Class B periodical. Copyright number B 437788. 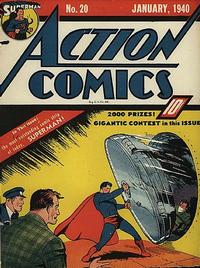 [Superman and the Screen Siren] (Table of Contents: 2)

First Line of Dialogue or Text
With an ominous creaking and snapping...
Genre
superhero
Characters
Superman [Clark Kent]; George Taylor (Daily Star editor, unnamed); Dolores Winters [aka Ultra-Humanite] (death); Ultra-Humanite (villain)
Synopsis
After Clark Kent saves Dolores Winters from harm, he is granted a special interview. When that interview is cancelled and she kidnaps a boatload of wealthy citizens, Superman intervenes and discovers that Ultra has had his mind transplanted into her body.
Reprints
Keywords
Colossal Film Studio; Daily Star; The Sea-Serpent (a boat)

Pencils previously credited to Joe Shuster, but this is clearly a Cassidy solo effort (check, for example, the typical Superman pose in the first panel). He claimed that both he and Wayne Boring were allowed to interpret scripts with no editorial interference.

The last panel of the story is an illustrated ad for Sandman in Adventure Comics and Batman in Detective Comics.

First Line of Dialogue or Text
Look at that fellow - he's flying pretty low...
Genre
adventure; sports
Characters
Pep Morgan; Jimmy Dee, the Racing Pilot
Synopsis
While home on vacation Pep is playing for his home town baseball team, when a plane makes an emergency landing on the field. Pep drags the pilot out and the fire is extinguished. The pilot, Dee, invites Pep to go to the Air Races as his mechanic. Mobsters try to sabotage the display, but Pep saves the day.

First Line of Dialogue or Text
For two days Chuck has followed the dangerous trail...
Genre
adventure; western-frontier
Characters
Chuck Dawson; Ned Squires
Synopsis
Chuck finds Ned Squires dry-gulched on the trail. Two men appear and try to take him in for the crime, but Chuck disarms them and runs.

First Line of Dialogue or Text
Making friends with those cannibals...
Genre
adventure
Characters
Clip Carson; "Wolf" Lupo (villain)
Synopsis
Clip is leading a party of natives carrying an ivory shipment to the coast. Along the way there are various attempts on his life. Eventually they reach the area where "Wolf" Lupo has hijacked previous ivory shipments. As Clip is about to be killed by Lupo's men he asks to play a tune on his harmonica one last time. The tribe of cannibals which he previously gave a bunch of harmonicas to are nearby, hear the music, and save him. Clip chases after Lupo and kills him.

First Line of Dialogue or Text
Having been inoculated with the dread chemical...
Genre
adventure
Characters
Tex Thomson; Bob Daley; Gargantua T. Potts; Bart Barryless
Synopsis
Tex, Bob and Gargantua have been injected with the chemical which saps men's will and makes them appear to be zombies. But they have previously been given an antidote and all swallow the salt which they had in their mouths to counteract the effects. The antidote is given to the other "zombies" and they begin to feel and act more normal. After Tex knocks out the native chief the tribe tie him to a stake over a roasting pit. But the now restored "zombies" advance en masse and free him.

Split over two pages, much of them taken up with ads and the Statement of Ownership. About one page of story text in total.

At the bottom of the first page of the text story.

First Line of Dialogue or Text
Although model trains were first made in France...
Genre
non-fiction