The on-sale date of November 20, 1939 is the publication date reported in filings with the U. S. Copyright Office. However, a house ad in Action Comics #19 states the issue was to be on sale on November 10.

The cover artist was mis-credited as Harry Lampert in the Millennium Edition, but corrected in the corrections page in Millennium Edition: Superboy #1 (2001 series), and also correctly credited in the two Archives. Flash has lightning bolts on his trousers and on his belt buckle. 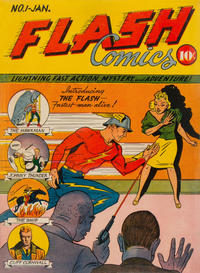 [Origin of the Flash] (Table of Contents: 2)

First line is "But before he became known and feared as 'the fastest thing on Earth,' Jay Garrick was an unknown student at Midwestern University..." The Flash has lightning bolts on his belt buckle and trousers.

[The Disappearing Plane] (Table of Contents: 3)

Genre
adventure
Characters
Cliff Cornwall; un-named Army General; Lys Valliere
Synopsis
Cliff is on vacation from the FBI, but the Army nabs him for a special assignment in Alaska to put an end to phantom plane attacks on military aircraft.
Reprints

First line is "A fleet of U.S. bombers wing their way toward Alaska..." Writer credit by Craig Delich. The Millennium Edition incorrectly credits Sheldon Moldoff for the writer.

[The Origin of Hawkman] (Table of Contents: 4)

The title here was given in Golden Age Hawkman Archives Vol. 1 where this story was reprinted. First line is "In the weapon-lined library of Carter Hall, wealthy collector of weapons and research scientist..."

[The Kidnapping of Johnny Thunder] (Table of Contents: 5)

Genre
superhero
Characters
Johnny Thunder (introduction, origin); Thunderbolt (introduction); Simon B. Thunder; Mildred Thunder; Priest of Aissor
Synopsis
Young Johnny Thunder is kidnapped from his home, given Badhnisian sacred rites and would become the most powerful person in the world at age 7. By a weird chance, Johnny is reunited with his parents, but is sought out once again by the Badhnesians, who are on the receiving end of a new, strange power Johnny has by saying the words "Say You."
Reprints

First line is "One night in August, 1918, Simon came home from the bank and found a crowd around his house..." Thunderbolt appears as a yellow streak of lightning and as a pink cloud in this story.

Warfare in Space, Part One (Table of Contents: 6)

Genre
science fiction
Characters
Billy Morton; Keith Morton; Port Commander Worth; Ralph "The Ruthless" Farnham (villain)
Synopsis
Billy's Dad has created a weapon that can be effectively used in interstellar space....and he wants to volunteer to use it against the space pirate, Ralph Farnham!
Reprints

Story continued in Flash Comics (1940 series) #2. There are three small ads for fireworks at the end of page 2 for Baltimore Fireworks Co., Spencer Fireworks Co., and The Brazel Novelty Manufacturing Co.

The Whip is Eastern playboy Rod Ellwood Gaynor. The strip is set in the southwest. First line is "He was known as Don Fernando Suarez, a patrician descended from the Grandees of Spain..."