[Scrooge as Santa] (Table of Contents) 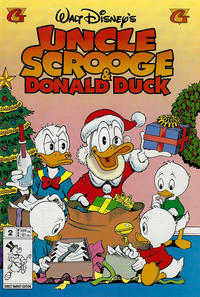 Credits in comic are: "art by Selecciones and Vicar." I.N.D.U.C.K.S. only credits Vicar with pencils and has no credit for inks.

Donald and the Bear (Table of Contents: 4)

A reworking of Carl Barks' "A Christmas on Bear Mountain" without Uncle Scrooge. Plot credit from I.N.D.U.C.K.S. Credits in comic has "art by Selecciones and Vicar." I.N.D.U.C.K.S. has Vicar for pencils and no credit for inks.