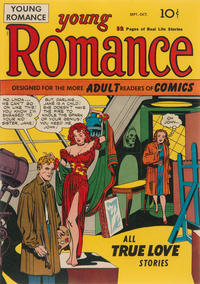 Genre
romance
Characters
Toni Benson; Granny; Bob Scott; Stanley Budko; Jerry
Synopsis
After her mother runs away, Toni is raised by her strict grandmother. Accepting a ride from Bob, Toni goes with him to a roadhouse. During a police raid, Bob ditches Toni but she’s rescued by club owner Stan. They date for a time but Stan vanishes, because he doesn’t want her to be tainted by his bad reputation in town. Toni allows herself to be picked up by Jerry but flees when he makes a pass at her. She discovers Stan now runs a gas station and they are reunited.
Reprints

The Farmer’s Wife (Table of Contents: 2)

Genre
romance
Characters
Nancy Merrin Toomey; Bill Toomey
Synopsis
Nurse Nancy treats Bill in a veteran’s hospital and they become friends, even though he’s 15 years older than her. They date and become engaged, but she won’t marry him unless he gives up his dream of being a farmer and takes a job with the Department of Agriculture instead. After they wed, Bill is always “too tired” to go out with Nancy at night. This causes marital strife and he eventually leaves her. She tracks him to his farm and finds him rejuvenated: she realizes it was the office work that made him act old and worn-out. They reconcile.
Reprints

Genre
romance
Characters
Sherman Sherman; June Collins; Karl Barton Jr.; Karl Barton Sr.; Mr. Jensen
Synopsis
Factory worker June has a crush on Karl, snobbish son of the factory owner. After Karl’s father sends him to work in the plant, Karl begins to date June, to the consternation of worker Sherman, who loves her. When Karl makes a disparaging remark about June, Sherman punches him and gets a promotion from Karl’s father. June realizes Sherman is the man for her.
Reprints

In panel 1 of page 2, June and another worker are having a conversation, and June calls the other woman "June." So unless they are both coincidentally named June, this is a blooper.

Diary of a Doubtful Damsel (Table of Contents: 4)

The Plight of the Suspicious Bridegroom (Table of Contents: 5)

Genre
romance
Characters
Frank McHale; elevator operator; Ann; Jenkins
Synopsis
A sinister apartment building elevator operator tells his passenger about his hobby of breaking up engagements by planting seeds of suspicion and jealousy in each future groom’s mind. He doesn’t realise that his passenger is Frank, his latest “victim,” and gets a punch in the nose for his trouble.
Reprints

This story is seen "through the eyes" of Frank (his eye sockets frame most panels).

Genre
romance
Characters
Jenny Porter; Chuck Haley; Pamela Bradford; Rick Carlson; Mr. Carlson
Synopsis
Jenny lives in a resort town and envies the life of the wealthy summer residents, feeling local suitor Chuck is too ordinary, crude and low-class for her. Jenny meets rich tourist Rick, who agrees to meet her at the Yacht Club dance, even though he’s engaged to Pamela. Chuck escorts Jenny to the dance and she ditches him for Rick. Pamela and Chuck scheme to make Rick reveal that Jenny means nothing to him. Jenny and Chuck reconcile.
Reprints