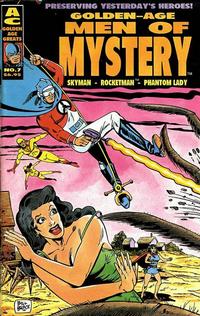 The 7th Big Issue! Men of Mystery (Table of Contents: 1)

Text article containing information on each character (and their story) featured in this issue of Men of Mystery, a promo for the next issue, including a reprint of the cover and a small blurb advertising The Official Golden-Age Hero & Heroine Directory.

First Line of Dialogue or Text
An evil genius, spawned in Berlin looses a horrid plague...
Genre
superhero
Characters
Skyman; Fawn Carroll; Gus; Mr. Dager
Synopsis
When the city is attacked by giant dragon-flies Skyman is called in to help. He finds out that giant insects are being created to interrupt War production and it is up to him to stop them.
Reprints

First Line of Dialogue or Text
Death rode the wings of night and only the Moon...
Genre
superhero
Characters
Rocketman [Cal Martin]; Rocketgirl; Nick; Liz; Steve; Mr. Featherby; Cal Martin; Elias Butterworth
Synopsis
Cal Martin (Rocketman) is hired to stop a ring of thugs that is blackmailing people by making them think that they have killed someone by running them over.
Reprints

Annihilation in the Air (Table of Contents: 4)

Genre
superhero
Characters
Bulletman [Jim Barr]; Bulletgirl [Susan Kent]; Lieutenant Kent; Jim Barr; Susan Kent
Synopsis
While watching a cross country air race Jim and Susan see one plane explode and another develop trouble. When they try to save the pilot as Bulletman and Bulletgirl they discover a plot by two pilots to win the race by killing all of their opponents.
Reprints

First Line of Dialogue or Text
A fusilade of gunfire from sub-machine guns echoes...
Genre
superhero
Characters
The Eagle [Captain Bill Powers]; Buddy; Grogan; "Gangy" Krone; Jimmy; Lem; General Meade; Captain Bill Powers
Synopsis
When Grogan's mob is fingered for a hit they figure the best way to get away is to enlist in the army. Once there they make money by betting on boxing and gambling then move up to robbing a bank and a train before The Eagle and Buddy track them down.
Reprints

New Format for Men of Mystery (Table of Contents: 8)

The announcement that Golden-Age Men of Mystery will now be monthly and each issue will have in-depth text articles on different super-heroes. A description of issue #10's focus on Mystery Men of the Movies is included, as is an explanation of the retro stories that will now be included. Synn Watch is advertised with a listing of some of the contents of the first issue. Other Golden-Age material not published by AC is also covered, including the Golden Age of Marvel Comics Trade Paperback, Wonder Woman: DC Archives Volume one and The Flash #134 (a new story featuring a golden-age character).

Here for Today, Tomorrow and Forever! (Table of Contents: 11) (Expand) /