Cover bills this as a Secret Wars II crossover

From the Pages of Deadpool--Deadpool! (Table of Contents) 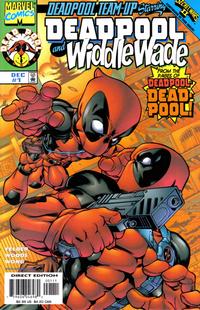 Previously In Deadpool (Table of Contents: 1)

Genre
humor; superhero
Characters
Deadpool [Wade Wilson]; GUESTS: Beyonder; C.F.; Patch; Oyakata; Sazae; VILLAINS: Widdle Wade (death); Daruma; Shigeru (death); The Boss
Synopsis
In the distant past, Deadpool interferes with the Beyonder's plan. Shigeru creates a clone of DP, Widdle Wade. In the present, the Boss contacts Deadpool and tells him that a killer is on the loose and asks him to protect the next target, Oyakata, whom he knows. 'Pool travels to Japan where he encounters Widdle Wade and fights him off. In the past, Deadpool is also reunited with Oyakata's daughter, Sazae. Widdle Wade attacks again. 'Pool tells Sazae that he was the one who killed all of her father's old targets, thus restoring him to honor in his daughter's eyes.
Reprints

The opening Beyonder sequence claims to be continued in Secret Wars III #2 (a thoroughly fictitious comic).