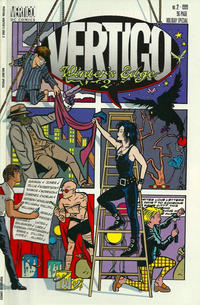 [Title and Credits] (Table of Contents: 1)

Contents page; modified versions of panels from pages 3 and 73 form the background.

A Winter's Tale (Table of Contents: 4)

First Line of Dialogue or Text
It used to bother me.
Genre
fantasy-supernatural; horror-suspense
Characters
Death
Synopsis
Death talks about her work.
Reprints

Features Death of The Endless.

In the City of Dreams (Table of Contents: 6)

We Three Things (Table of Contents: 7)

First Line of Dialogue or Text
Once upon a time, magic came to me as easy as breathing. I didn't even have to think about it.
Genre
fantasy-supernatural
Characters
Tim Hunter; Sundrop; Wishbone; Sage
Synopsis
Tim Hunter helps some lost Faeries.
Reprints
Keywords
Faeries; London; wishing stone

God and Sinners (Table of Contents: 8)

All Those Little Girls and Boys (Table of Contents: 12)