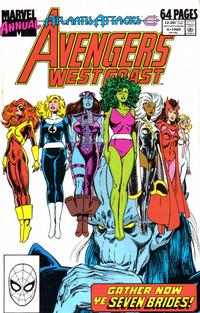 Contents, illo (from the last page of the story), recap and indicia

Rate the Hunks (Table of Contents: 5)

...So What Are You Going to Do After You Conquer the World? (Table of Contents: 7)

Genre
superhero
Characters
Firebird; Atlanteans; Iron Man (flashback); Sub-Mariner (flashback)
Synopsis
In Baja, Mexico, Firebird encounters a detachment of Attuma's scouts who previously escaped from a battle in the Panama Canal Zone against Iron Man and Namor. She convinces them that they have nothing to gain from fighting superheroes and helps them repair their ship. She sends them to Tahiti to stay out of the fighting until the war has ended.
Reprints