When Gods Go Mad... Even Heroes Can Die! (Table of Contents) 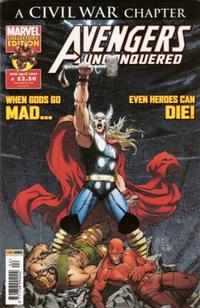 Daily Bugle Civil War Newspaper Special (Marvel, 2006 series) #1 is not indexed in GCD and was not directly referenced in this issue.

For the Best (Table of Contents: 7)

First Line of Dialogue or Text
I've never been so grateful to someone I hated as much as you
Characters
Norman Osborn
Synopsis
Norman Osborn accepts a vial to suppress the nanites in his blood from a shady character.
Reprints

This is a reprint from one of the Civil War issues. It is not referenced in anyway not even with a title.