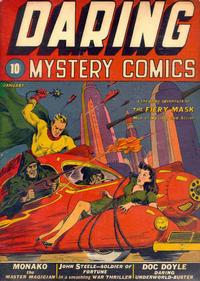 The Fantastic Thriller of the Walking Corpses (Table of Contents: 2)

First Line of Dialogue or Text
While the Allies are throwing back the enemy in a terrific battle -
Genre
war
Characters
John Steele (introduction); Marie; unnamed general; Nazis (villains)
Synopsis
Steele helps a nurse, whose life he has just saved, through a series of perilous encounters with the Nazis in order to get a vital message to the general.
Reprints

Allan Holtz's Stripper's Guide states that there is an entry in the Catalog of Copyright Entries for Antonette's "Dash Dixon" specifying "Dean Carr" as a pseudonym and not a writing partner. Confirmed on the Comics History Exchange list by Shaun Clancy from copies of the comic story maintained by Larry Antonette in his personal records (21 February 2015).

[The Thundering Terror of Gold Creek] (Table of Contents: 6)

Genre
adventure
Characters
Wade Duncan; Mr. Hastings; Hank Wells; Spud Clark; un-named blacksmith; gang of crooks from Chelsa City (villains)
Synopsis
A radio-controlled herd of wild, mad horses destroy the town of Gold Creek, sent on that mission by a gang of criminals from Chelsa City, who had been trying to buy out that town for some time.
Reprints

Title accidentally left off story- there is a blank cutout in the illustration where the title should appear.
Funnies, Inc. material.

Case of Perrone (Table of Contents: 8)

Genre
adventure
Characters
Phantom of the Underworld [Doc Denton] (introduction); Nurse Andrus (introduction); Inspector Flynn (introduction); Perrone (villain; introduction)
Synopsis
In order to get inside information on crime boss Perrone, Detective Denton takes over the offices of a local doctor so that he'll be in a position to treat Perrone.
Reprints

Genre
non-fiction
Synopsis
Interesting facts are illustrated, such as: some steel used in England's new battleships was scrapped from German ships sunk in WW1; none of the planes currently used in WW2 will be in existence after 20 days of war; the mystery of a new explosive made from wood and air; a pilot thrown from his plane actually fell back into it; and several others.
Reprints

Only appearance at Timely. Funnies, Inc. material.
The Sea Rover feature is next seen in Funny Pages #40 from Centaur http://www.comics.org/issue/969/#15022