A Fawcett Publication
Printer
Printed in U. S. A. 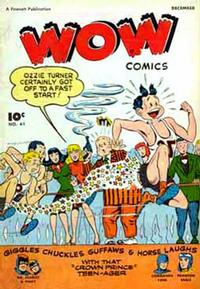 Genre
humor; teen
Characters
Ozzie Turner; Pop Turner; Dip; Slick; Maestro Pagalini
Synopsis
Ozzie's father insists that he learns to play the flute like him (he played for Maestro Pagalini), his grandfather and great-grandfather. Dip's dog knocks Ozzie over when he is running because of a dog whistle that Slick is blowing and the flute falls out of his pocket. Slick makes fun of Ozzie so he claims that he is carrying it for a friend. He refuses to play it and be teased so after trying to lose it a couple of times he finally breaks it in half so he won't have to play it. Right after he breaks it Maestro Pagalini calls and wants Pop to play it that night so Ozzie turns to Slick for help and he lends him one. Ozzie takes it to his dad and when he starts to play it turns out that Slick's dog whistle is in it and dogs run in and ruin the concert. Pop is choking Ozzie when a critic comes up and says the dogs were a nice touch because they were playing "the overture of a dog's life". Maestro Pagalini asks Pop to play the flute whenever he is in town. As a reward Ozzie no longer has to learn the flute so he thanks Slick who is completely confused.

Genre
humor; sports
Characters
Muscle Hedd
Synopsis
Muscle Hedd reports that his dog has run away. The cops ask him when and he says three years ago. They ask him why he didn't report it sooner and he says it's because he just got lonesome.

Genre
humor
Characters
Boy Scout Bob
Synopsis
A rather large woman is looking in a puzzled way at a gate. Boy Scout Bob goes up and asks if he can help her. She says that she wants to know if she can get out of the park through that gate. He says yes because earlier today a truck much bigger than her went through that gate.

Will Power (Table of Contents: 6)

Genre
superhero
Characters
Brian Butler [Mr. Scarlet]; Pinky; Harry Day; John Day; Robert Day; Tom Day; Counsellor Kane; Mr. Scarlet
Synopsis
Brian Butler's uncle Harry calls Brian and three others together to let them know that he is leaving his money to the four of them equally. The next day Counsellor Kane calls the four back together and says that it appears that Uncle Harry committed suicide and that to get the money from his will the four of them have to spend a week together in his cliffside home. Robert goes ahead to get the house ready. When the others get there John Day is killed when he opens the door in what is apparently an accident. When the others get inside they find a burned body in the fireplace that has a buckle with R.D. on it so they expect that Robert is dead. Tom is killed when the couch they sit on falls through the floor. Brian figures out that everyone is being killed and they find the next trap. He and Pinky set it off and then hide to see what is going on. They find out that Counsellor Kane is working with Robert Day to get all of the money. He burned a hobo's body and put his buckle on it so everyone would think he was dead. Mr. Scarlet and Pinky stop him and rescue Uncle Harry, who is tied up in the basement.
Reprints

The Mill Road (Table of Contents: 7)

Characters
Penny Graves; Police Chief Ben Morgan; Blackjack Malone
Synopsis
Penny Graves is a girl detective who demands to be assigned to a case of robberies where during their latest robbery the thieves shot holes in her two front tires. She decides to find them and finally comes upon their getaway road. She follows it and is sneaking up on them when she trips and falls into the cellar. When Blackjack Malone grabs her she throws herself into a jarring tackle and scoops up the gun he drops and shoots it. As she leads them to the police she tells them that the next time they feel like shooting holes in a girl's new tires they better forget it.

A Manly Answer (Table of Contents: 9)

Genre
humor
Characters
Boy Scout Bob
Synopsis
A man watching Boy Scout Bob thinks he looks like a nice little fellow so he decides to tease him. He asks him why he is wasting his time playing with a toy sailboat and Bob says that he has already done his good deed for the day. The man says he should look around for another to do and he says sometimes he wonders what little boys are good for. Boy Scout Bob says that they're good to make men of.

The Planes That Wouldn't Land! (Table of Contents: 11)

Genre
aviation
Characters
The Phantom Eagle [Mickey Malone]; Mr. Prescott; Crass
Synopsis
The sky above International Airlines headquarters is full of plans with non-working radios that can't land. Responding to the call for help, Phantom Eagle discovers that they are trapped in an energy sphere by pirates who are robbing the planes. After killing some of the pirates, their leader demands Phantom Eagle to surrender or they will crash all the planes. After he lands, Phantom Eagle discovers an executive on the council of International Airlines named Crass is the pirate leader. Crass begins to torture him for exposing his crimes, but Phantom Eagle gets away & captures Crass.

Art credits were verified by Swayze in this same issue.

The Stool Pigeon (Table of Contents: 13)

Genre
humor; detective-mystery
Characters
Richard Richard; Ah Choo; Flub Dub
Synopsis
Richard Richard overhears the cops saying that four stores have been robbed and they need a stool pigeon to find out who is doing it. Since they have no money Richard decides to steal a stool pigeon from a local pet shop. While they are looking for a pigeon on a stool a robber sneaks in. Richard thinks it might be the owner going to a masquerade party and knocks him out. The police rush in and congratulate Richard for catching the crook. Flub Dub says it takes a bird brain like Richard Richard to catch a crook in a pet shop.

Riddle of the Arctic (Table of Contents: 15)

Genre
superhero
Characters
Chase Yale [Commando Yank]; Red Hawk; Pierre Grisette
Synopsis
Chase Yale gets a letter from Red Hawk asking for help. When Chase gets there he finds that the fish have stopped running and everyone in the village is going to lose their boats to Pierre Grisette, who loaned them money they can't repay if they don't catch any fish. It turns out that Pierre has trapped the fish upstream with some whales that are feeding on them. He makes the whales sick by feeding them mustard and making them vomit up precious ambergris. Commando Yank stops him and releases the trapped fish. Red Hawk keeps the ambergris so that he can sell it to keep his people from starving.
Reprints

Genre
humor; sports
Characters
Muscle Hedd
Synopsis
Three guys say that Muscle Hedd is the biggest boaster in town. They ask him why he is looking so pleased and he says it's because the Gabfest Society asked him to make a speech at their meeting. They make fun of him and he says that he could make a speech on any subject if he had a mind to. They say sure; nothing's missing but the mind!