[The Strange Death of Captain America] (Table of Contents) 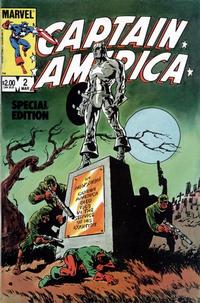 Jim Salicrup discusses Steranko's career, his magazine MEDIASCENE PREVUE and this issue's contents. He mistakenly refers to the Nick Fury story reprinted in this issue as coming from STRANGE TALES #169 rather than #159!

The Strange Death of Captain America (Table of Contents: 2)

Part 3 of 3. The climax of this story in part pays tribute to "Spy Ambush" from CAPTAIN AMERICA COMICS #10 (January 1942). Nick Fury presumably appears between NICK FURY #11-12. HYDRA would finally return to battle SHIELD this month in NICK FURY #12 (May 1969). After all the effort to get Cap and Rick together as a regular team, it would prove short-lived, as Roy Thomas and Gil Kane wound up teaming Rick with Captain Mar-Vell in CAPTAIN MARVEL #17 (October 1969).

Following the cancellation of NICK FURY, Nick, SHIELD and HYDRA became recurring elements in the CAPTAIN AMERICA series. In the wake of Baron Strucker's demise, most HYDRA stories beginning with this one involve regional factions rather than one big, centralized organization. Although she appeared to have been killed at the end of this episode, Madame Hydra would return-- renaming herself "The Viper"-- in CAPTAIN AMERICA #180 (December 1974).

A parody of Jim Steranko's "Dark Moon Rise, Hell Hound Kill!" from NICK FURY, AGENT OF SHIELD #3 (August 1968). This was published only 4 months after the original. Frank Springer had become the regular artist on SHIELD at the time this came out (and doing this may have been what caused Herb Trimpe to have to pitch in on pencils for NICK FURY #8). "Knock Furious" header removed from splash page for this reprint.

My Heart Broke In Hollywood! (Table of Contents: 4)

Genre
spy; superhero
Characters
Dum Dum Dugan; Jasper Sitwell; Nick Fury; Gabe Jones; Laura Brown; Yancy Street Gang (flashback cameo); Mamma Fury (flashback cameo); Jake Fury (unnamed; flashback cameo); The Gaff [Sidney E. Levine]; Val [Contessa Valentina Allegro De Fontaine]; Captain America [Steve Rogers]
Synopsis
Fury reminisces with Laura about his days growing up in Hell's Kitchen and later offers her a job as an agent. Attending a training session for recruits Fury meets two agents: Sidney E. Levine, a tech expert (who agrees to replace Fury's destroyed Porsche 904) and Val, who scoffs at his attitude that the spy game is man's work. Fury takes on Captain America in a display bout for the recruits, but gets dizzy due to a side-effect of the invisibility pill he used earlier. Cap tells him he's found out who was responsible for a job they tackled "a year ago"-- "The Big Blackout".
Reprints

Part 1 of 9. 1st appearance of Fury's apartment, The Gaff & Val. During the fight, Cap mentions the last time he and Fury met was when they fought "THEM"'s Humanoid Assassin in TALES OF SUSPENSE #78 (June 1966). That story was clearly Cap and Fury's 1st meeting since WW2 in SGT. FURY AND HIS HOWLING COMMANDOS #13 (December 1964), as Cap had been trying to contact Fury for months about possibly becoming a SHIELD agent (seen in several issues of THE AVENGERS). Yet 4 pages later, Cap refers to a job they tackled together "a year ago". (Perhaps "The Big Blackout" took place immediately after TOS #78, as there was a break between issues #78 and #79.) Meanwhile, after loitering in the shadows outside Stark Industries for 2 months, Jasper Sitwell would become a regular in the Iron Man series in TALES OF SUSPENSE #95 (November 1967).