All Gustavson credits from Terry Gustafson, son of Paul Gustavson. 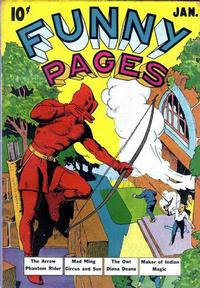 How to Win at Checkers / advertisement / 0.5 page (report information)

Lower right of inside front cover. Per Frank Motler, E L. Angel is Evangeline Angel, wife of Warren Angel who was the head of Kable News. Therefore Centaur was likely distributed by Kable at this point.

First Line of Dialogue or Text
My son, the time has come for your young body to replace this ancient one's!
Genre
superhero
Characters
Mantoka (introduction; origin); Mantoka's father;
Synopsis
Mantoka's father, the tribe shaman, passes his powers on to Mantoka. When the hunters of the tribe start to go missing, Mantoka finds that they have been captured by a white man who is forcing them to work in his mines.
Reprints

First Line of Dialogue or Text
The boss says to git some of you boys and go out to the buryin' with him...
Genre
western-frontier
Characters
Phantom Rider; Sherrif Warder; Blarsted
Synopsis
When Blarsted, the most powerful man in Mesquite, drives out the Sherrif, the Phantom Rider comes to his aid.

Art previously attributed to Martin Filchock, but Jim Amash of the Timely-Atlas list spoke with Filchock and confirmed that he never worked on the Phantom Rider nor with Jack Cole. This arguably calls into question the Cole credit as well, which was from the same source (Henry Andrews 2009-03-16).

First Line of Dialogue or Text
Make magic your hobby!

First Line of Dialogue or Text
This is your page- so use it!
Synopsis
Numerous drawings sent in by readers.

Genre
adventure
Characters
Ora [Joan Trevor]; Briny Bill (death); Gary Hale; Zuma (villain; death)
Synopsis
Zuma shoots and kills Briny Bill from a hiding place, cutting short his reunion with Ora. However he falls from his perch and is killed by a gorilla. Gary begins to take Ora, now Joan Trever once more, back to England as Bill wished. But the two have fallen in love, and Joan agrees to go with Gary to America as his bride.

From a movie produced by Allan Dorne, directed by Lee Barton and starring Diana Deane as Ora [Joan Trevor].

First Line of Dialogue or Text
When crime breaks out, The Owl prowls...
Genre
superhero
Characters
The Owl [Jack]; The Owl's father; Zeb Hale (death)
Synopsis
The fastidious librarian in a large southern city is secretly The Owl, who lives with his father in the nearby swamp. The Owl's father lost his legs because of a racketeer and spent his life designing the Owl's flying suit. They track a kidnapping gang to Zeb's farm and the Owl runs their car off a cliff.

Neither the Owl nor his father are named in the story. While Filchock generally wrote the stories he illustrated, Jerry Bails' Who's Who specifically lists him as only the artist here (Henry Andrews 2009-03-10).

Synopsis
This is a text page filler with two spot illos. The text consists of eight joke dialogues.