The Coming of Colossus! (Table of Contents) 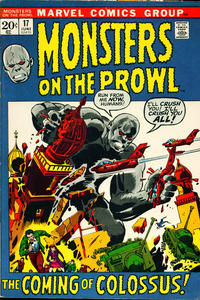 Chapter One I Created the Colossus! (Table of Contents: 1)

Job Number
V-57
Genre
science fiction
Characters
Colossus [later It, the Living Colossus] (Introduction); Ivan Petrovski (Introduction); Boris Petrovski (Introduction)
Synopsis
A Russian dissident is forced by his loyal brother to build a giant statue glorifying the USSR. An alien crash lands and fuses with the statue for protection, animating it and defeating the whole military. The alien’s companions retrieve it and the sculptor claims that the statue was a judgement against dictatorship, frightening the regime.
Reprints
Keywords
monsters

Job Number
V-35
Genre
science fiction
Characters
Colossus [later It, the Living Colossus]; Ivan Petrovski; Boris Petrovski
Synopsis
The Colossus escapes from the army and Boris takes the opportunity to attack the regime by declaring that after he built the statue a voice came from the beyond saying that it was time for dictators to be brought to task and power-mad rulers to be halted. Once away from the army the Colossus comes back and destroys a submarine and the war ministry decides to destroy it with a hydrogen bomb.
Reprints
Keywords
monsters

Chapter Three "The Power of the Colossus!" (Table of Contents: 3)

Job Number
V-35
Genre
science fiction
Characters
Colossus [later It, the Living Colossus]; Ivan Petrovski; Boris Petrovski
Synopsis
The Colossus flies and manages to destroy the plane with the hydrogen bomb. It then lands and another spaceship appears. The crab-like creature leaves the Colossus and goes home. Boris takes this chance to tell his brother Ivan that his Government must change or the Colossus will come back to life again. The Government changes and the Colossus stands guard to make sure that justice and peace will continue in the land.
Reprints
Keywords
monsters

Note at end of story explains absence of King Kull strip and notes the series will soon receive its own title.

Island of Fear! (Table of Contents: 4)

Job Number
A-504
Genre
horror-suspense
Characters
Nick Allen; Wheeler; Jeannie; Ronstedt; Morel; Perry
Synopsis
A "ghoulish" reporter finds more than he bargained for when he meets with a mysterious stranger on a boat to talk about some local disappearances.
Reprints