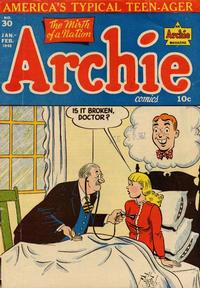 Patch As Patch Can (Table of Contents: 1)

Genre
teen
Characters
Archie Andrews; Betty Cooper; Mrs. Cooper; Jughead Jones; Mr. Weatherbee; Miss Grundy
Synopsis
It's Patch Day once again, when the girls get their Patch Hop dates by sewing patches on boys' pants. And when Archie rips his pants while escaping from an undesirable girl, he ends up hiding in Riverdale High with ripped pants - and then no pants!
Reprints
Keywords
Patch Day; school dance; sewing

2nd Patch Day story. An early prototype of Big Ethel appears in the story, but is not mentioned by name.

The Grid Kid (Table of Contents: 4)

Coach Piffle is the latest in a line of Coach Kleats prototypes.

The Battle of the Jitterbugs (Table of Contents: 7)