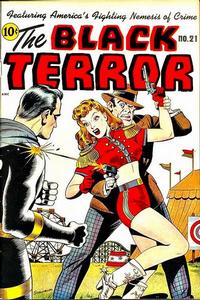 The Thieving Leprechauns (Table of Contents: 1)

Oddity: In panel 1 on page 7, the Terror is not wearing his mask.

A Race With Death! (Table of Contents: 2)

Job Number
CC-1098
Genre
superhero
Characters
The Black Terror [Bob Benton]; Tim [Tim Roland]; Jean Starr; Walt Slater (owner of the Bar-B Ranch, death); Reed Slater (Slater's son); Plug Wilson (Steve's son, villain); Steve Wilson (villain)
Synopsis
The owner of the Bar-B Ranch is murdered by a rival family that is just itching to get its hands on that property so they can control the water rights and therefore have every rancher at their mercy.
Reprints
Keywords
Bar-B Ranch; Benton Drug Store

The splash page is a double-page spread.

Oddity: Tim is shown wearing a domino-shaped mask as is the Terror in many (but not all) panels.

Job Number
CC-1042
Genre
superhero
Characters
The Black Terror [Bob Benton]; Tim [Tim Roland]; Jean Starr; Trigger (villain); Ace Crawley (villain)
Synopsis
Bob decides to take Tim to the amusement park instead of taking out Jean, but when they enter the "House of Laughs", it's anything but a laughing matter! Especially when it is being used to frame people for murder!
Reprints
Keywords
Benton Drug Store

Trail for Teddy (Table of Contents: 4)

Ring of Death (Table of Contents: 5)

This appearance occurs between America's Best Comics #24 and #25. Art identification verified by Bill Black and revision added by Craig Delich.